With Apple releasing Privacy Labels after the iOS 14.3 update, every app developer needs to provide details on what data is exactly collected and how it is linked to a particular user. After December 8, 2020, any iOS app that needs to push an update is required to follow Apple’s new privacy rules. However, National Informatics Centre (NIC), the developer of Aarogya Setu, is yet to push an update for the app or provide details on how personal data is collected and linked to users.

But before you come to any conclusion, note that even Google is yet to update any of its apps for iOS. Google has promised to release updates and provide privacy information for each of its apps soon but we still don’t know by when. On the other hand, apps like WhatsApp and Facebook messenger have revealed a long list of data that they collect from users.

Aarogya Setu is India’s first digital defence against COVID-19 and has been downloaded by over 17 crore or 170 million smartphone users in India. As per information provided on Google Play, the app has access to precise GPS location, Camera (take pictures and videos), receive data from Internet, view network connections, pair with Bluetooth devices, access Bluetooth settings, full network access, run at startup and prevent devices from sleeping. 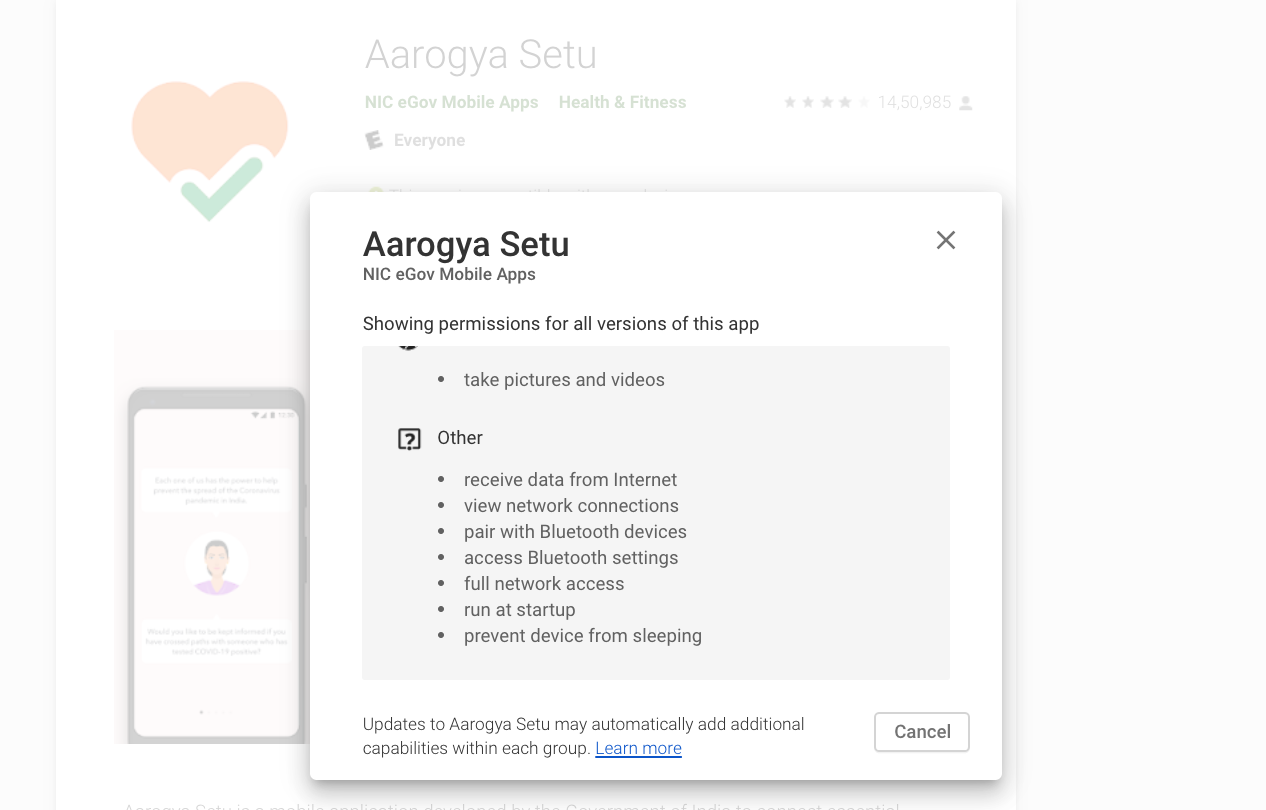 While there is no deadline for developers to update their apps, for any app to survive long term on iOS 14.3 or later, they will ultimately need to push an update and reveal how personal information is collected and linked to the user.

Aarogya Setu is one of the most downloaded apps in India, making it important for citizens to know exactly how their personal data is being treated.

In October, Abhishek Singh, CEO of MyGov and Digital India Corporation spoke to the media to clarify that the Aarogya Setu app was made by the National Informatics Centre (NIC) and Information Technology Ministry along with a private partnership. This clarification was required after NIC said to an RTI reply that it has no information about who has created the Aarogya Setu app and how it has been created. NIC designs government websites and comes under the IT ministry.

As far as Apple’s new privacy rules are concerned, before an app can digitally track you it has to ask for permission. Apple explains, “With iOS 14, iPadOS 14, and tvOS 14, you (developers) will need to receive the user’s permission through the AppTrackingTransparency framework to track them or access their device’s advertising identifier. Tracking refers to the act of linking user or device data collected from your app with user or device data collected from other companies’ apps, websites, or offline properties for targeted advertising or advertising measurement purposes. Tracking also refers to sharing user or device data with data brokers.”

How to make the most of tax deductions on education loan

An education loan allows you the finances and flexibility to take up higher education and pay for it systematically over a longer period. At the […]

New Delhi. If you are a customer of Punjab National Bank, then there is important information for you. PNB has alerted its customers and this […]

Online registration not mandatory for anyone above 18 to avail COVID-19 vaccine dose: Govt

New Delhi: The Central government on Tuesday announced that pre-registration or prior booking of appointment is not mandatory to avail the COVID-19 vaccination services. The clarification came […]

New Delhi. It is through the ration card that the government provides ration to the poor families living in their state. Ration is given to […]

The Indian government will enforce mandatory hallmarking of gold jewellery and artefacts from tomorrow. As per the new guidelines, jewellers across India will now be […]

Employee Provident Fund (EPF) is a government-backed scheme and is a compulsory deduction for salaried employees. It is a fund to which both the employee […]

No easy cash! Even Rs 100 withdrawal from bank ATM after free limit to cost Rs 21 next year

From January 1, 2022, bank customers will have to pay more for making more than allowed “free” transactions at ATMs. The RBI this week permitted commercial banks […]