New Delhi: Bharat Biotech on Thursday (April 29) slashed the rates of its COVID-19 vaccine ‘Covaxin’ to Rs 400 per dose for the state governments from the earlier Rs 600 per dose.

“Recognising the enormous challenges in the public healthcare system, we have made Covaxin available to state governments at a price of 400/ dose”, Bharat Biotech was quoted as saying by PTI. 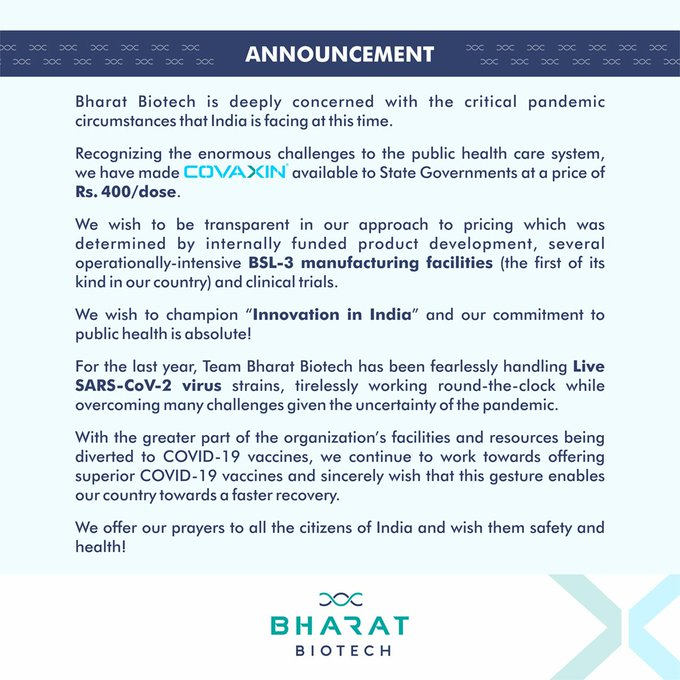 Earlier, Covaxin was priced at Rs 600 per dose for states, while Rs 1200 per dose was announced for private hospitals. The vaccine maker faced backlash for its pricing policy as it sold Covaxin to the central government at Rs 150 per dose.

The announcement by Bharat Biotech comes a day after the Serum Institute of India (SII) announced to sell Covishield vaccines to states at Rs 300, reducing the rates by Rs 100.

In a statement released on April 24, the Hyderabad-based vaccine manufacturer had said, “Following the Govt of India directives, we announce the prices of COVAXIN vaccines – ₹600 per dose for state hospitals and ₹1,200 per dose for private hospitals.” Export prices for the India-made Covaxin were capped between $15-20.

(April 28). All adults are eligible to receive the COVID-19 vaccine jab and can register themselves on the CoWIN portal or the Aarogya Setu app.

Google says 20% of workers will be remote, 60% to work three days from office after its offices reopen this fall

California: Google says it expects about 20% of ifs workforce to still work remotely after its offices reopen this fall, while some 60% will work […]

It has been over a year now, that schools have been conducting classes online, a 180-degree shift from the traditional face-to-face mode of classroom learning […]

Adobe’s Flash Player was released in 1996 and soon became one of the most popular online technologies. However, the same technology was plagued by security […]

New Delhi: A malicious SMS has been doing rounds in India over the past few days that has a fake link to an app for […]

Pay later or postpaid services can impact your credit score

When going through your credit report, don’t be surprised if you see loans or enquiries from lenders whom you have never approached. There is a […]

Vaccination is now open for people between 18 and 44 years as well, but getting an appointment is difficult as slots are filled up fast […]

WhatsApp has introduced a new feature in India that will help its users find the Covid-19 vaccination centre nearest to them. The messaging app will […]